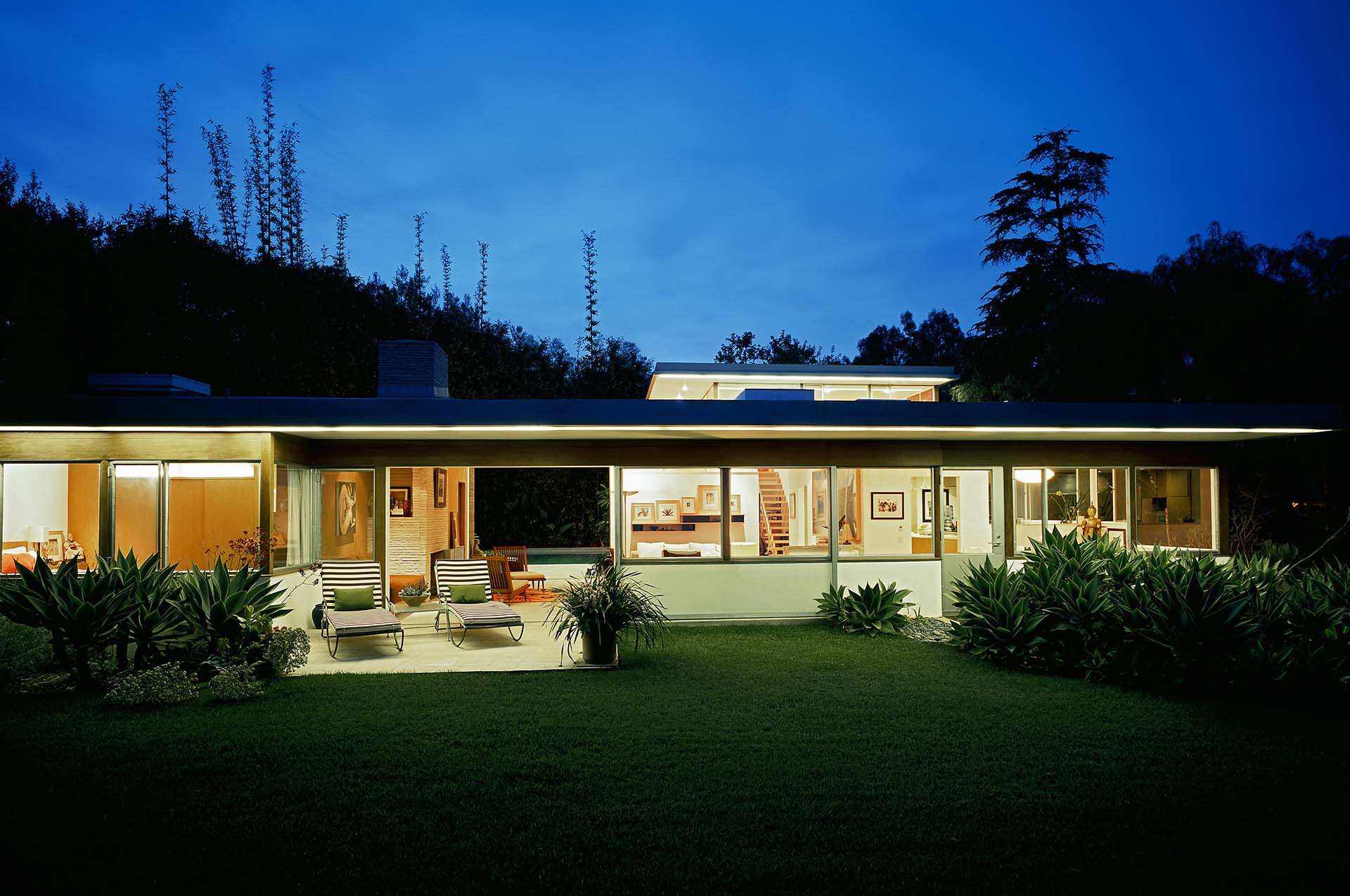 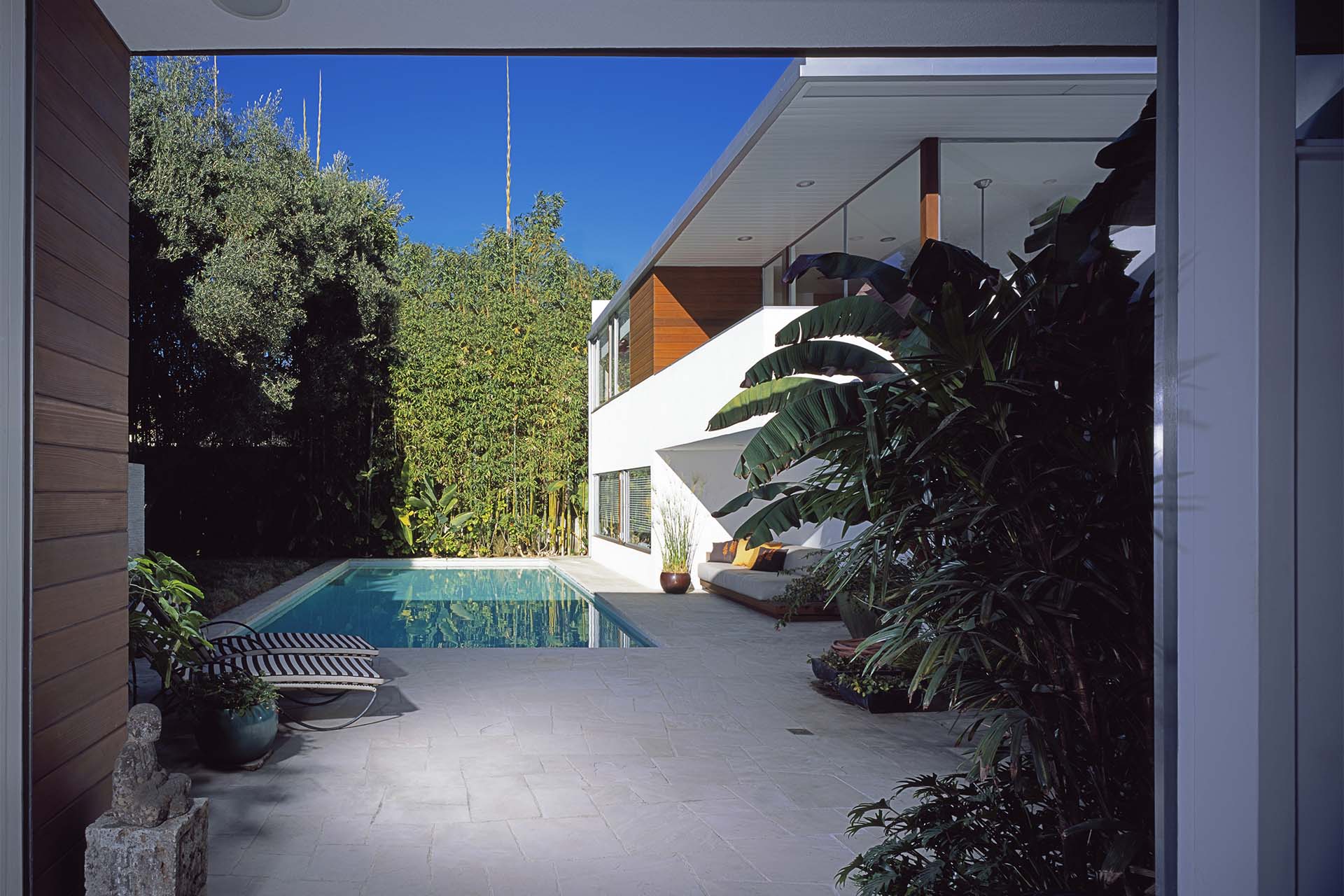 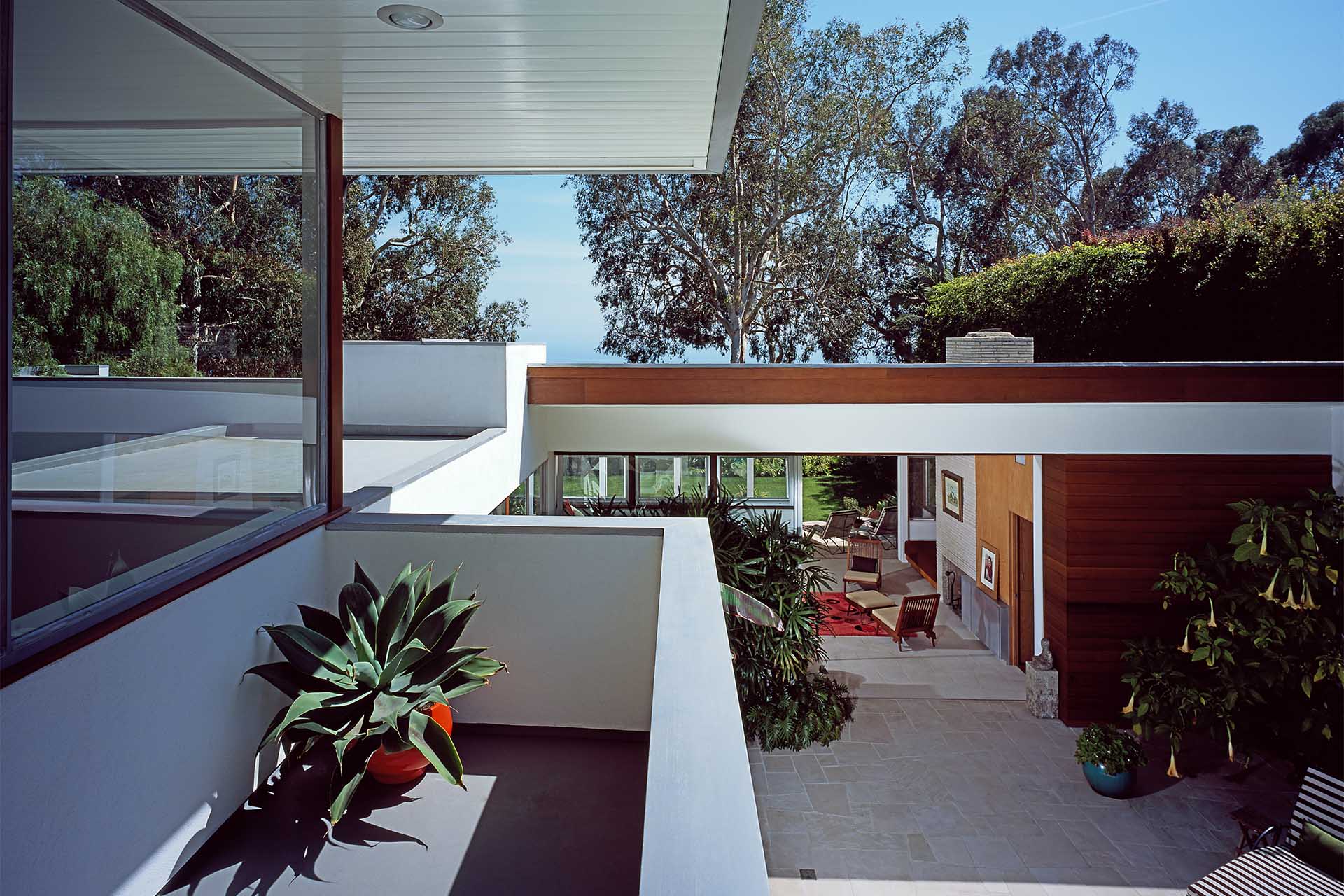 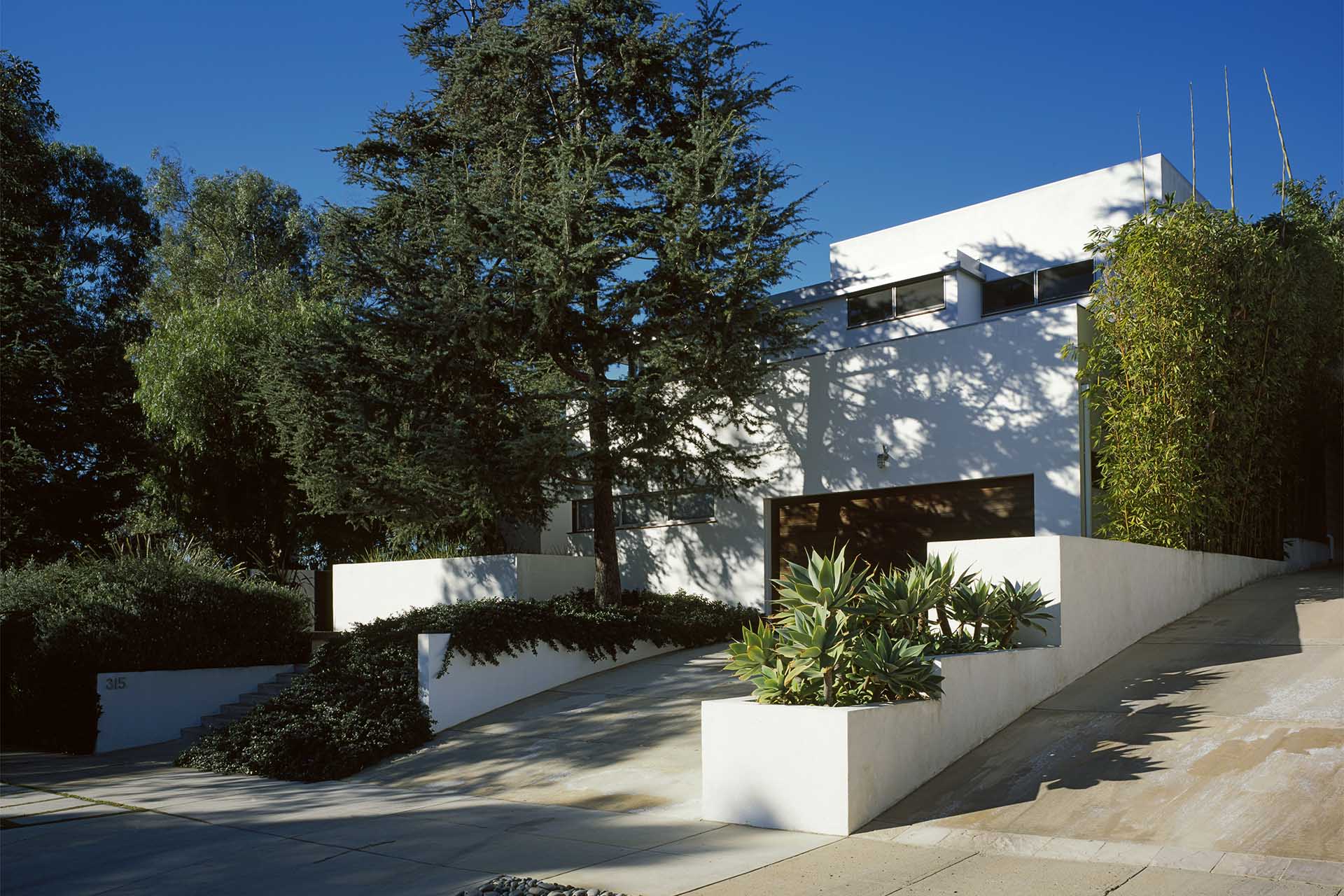 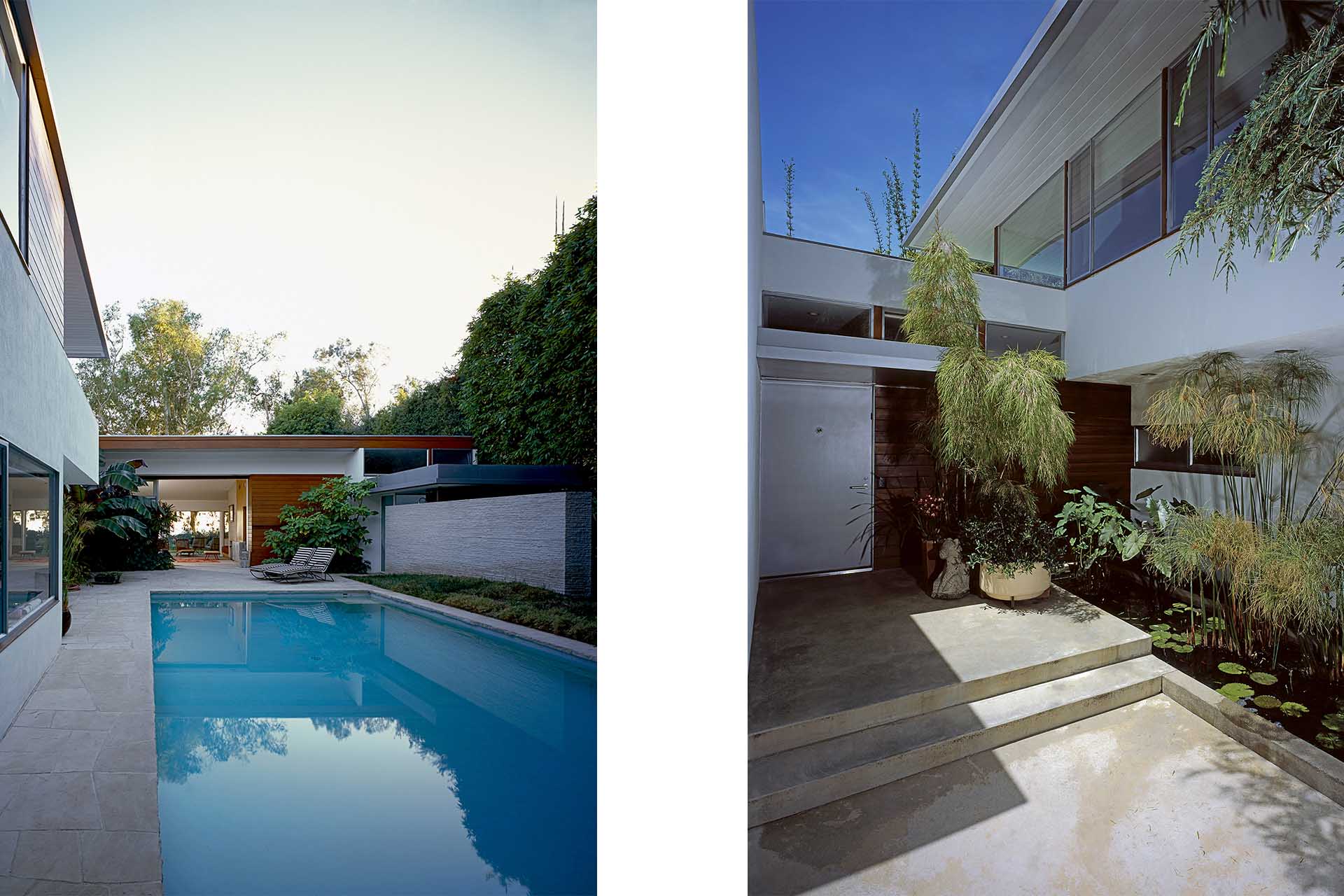 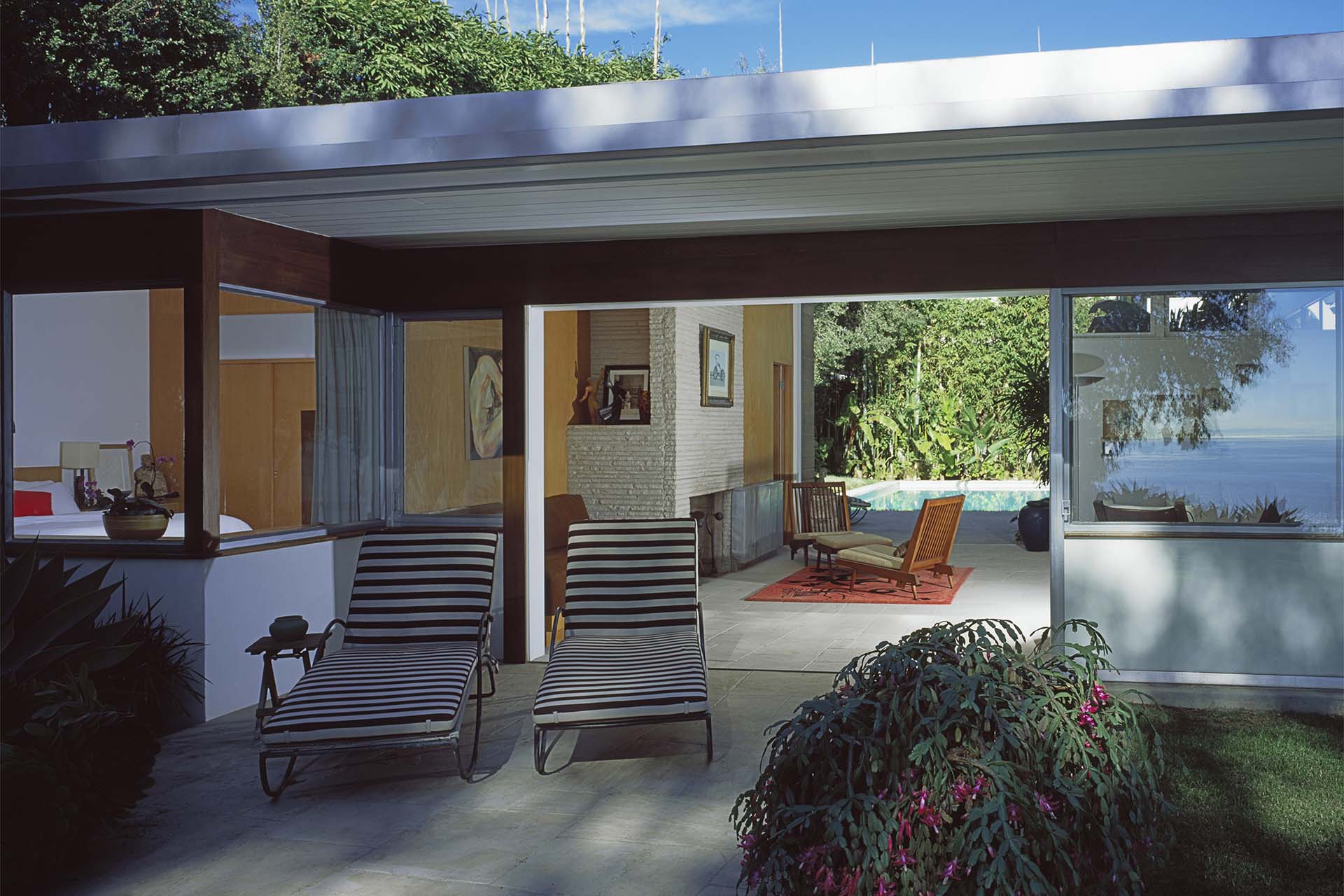 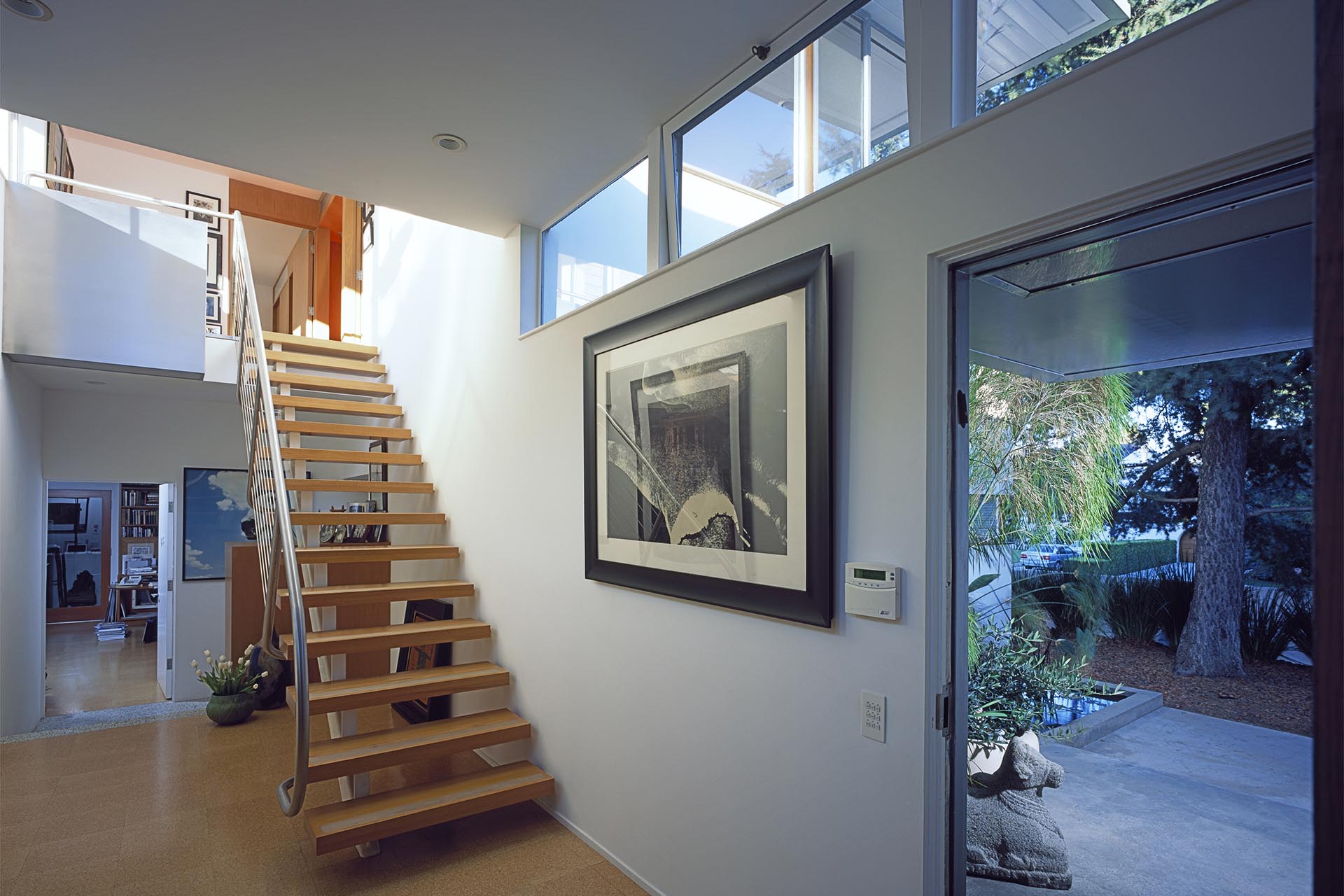 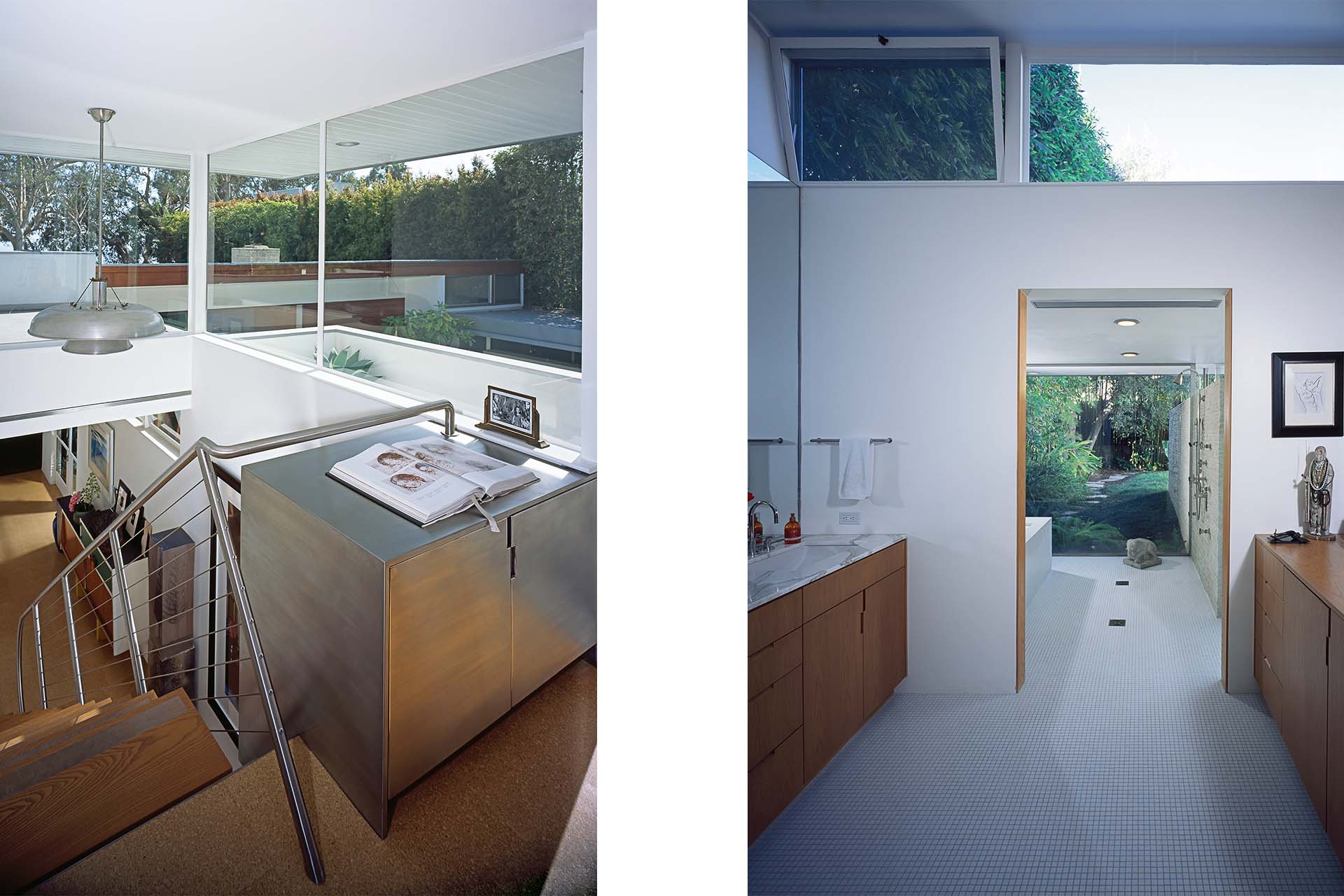 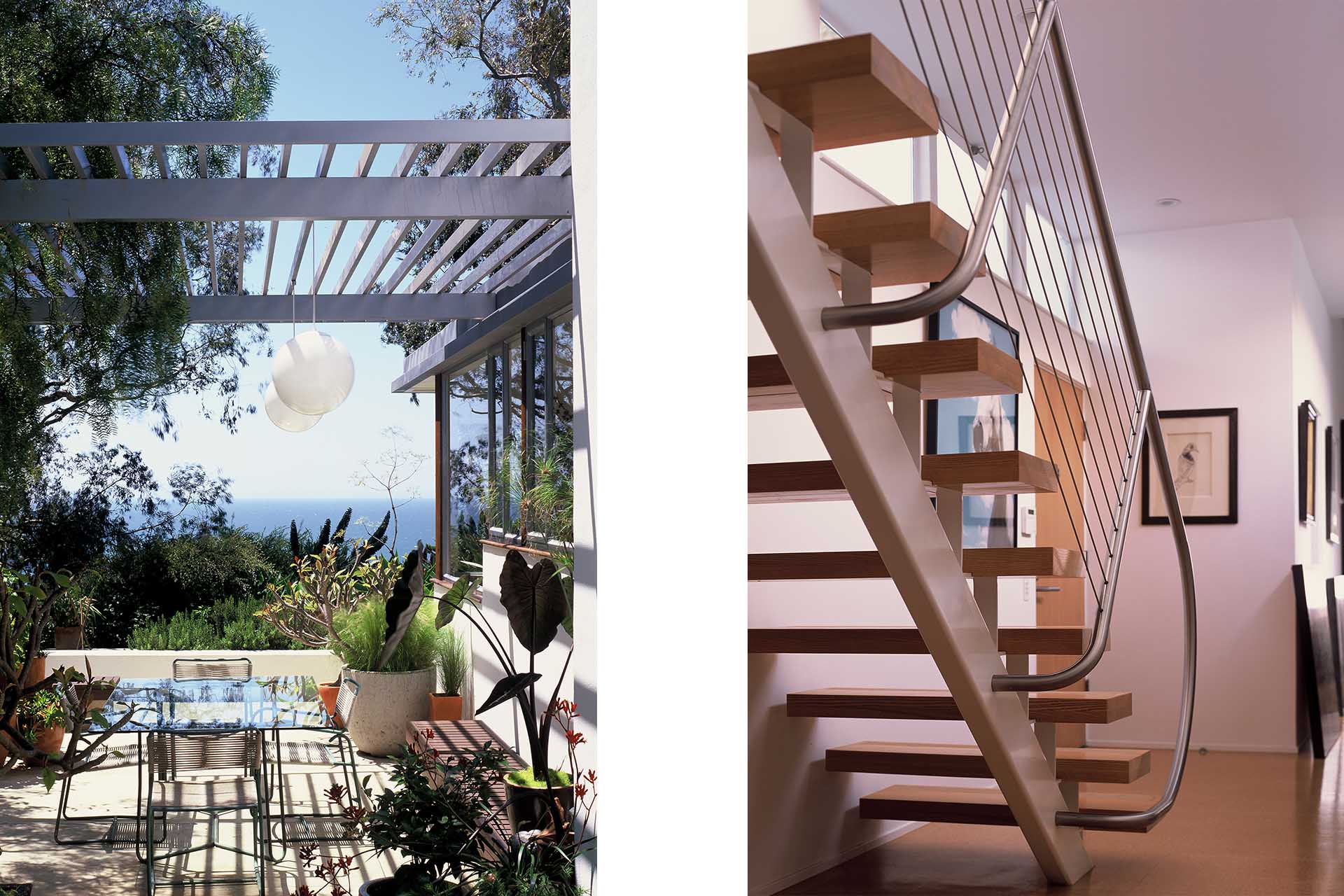 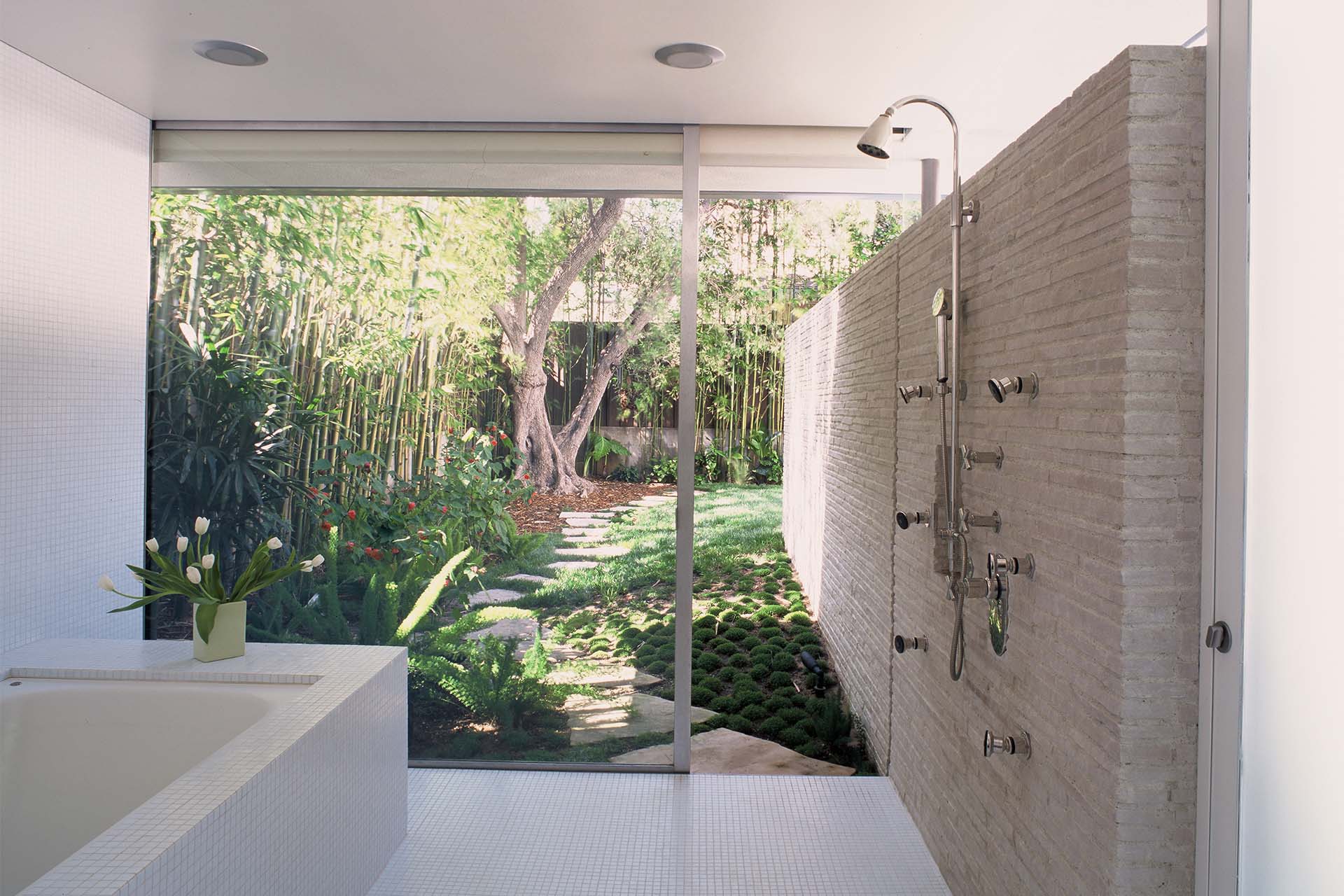 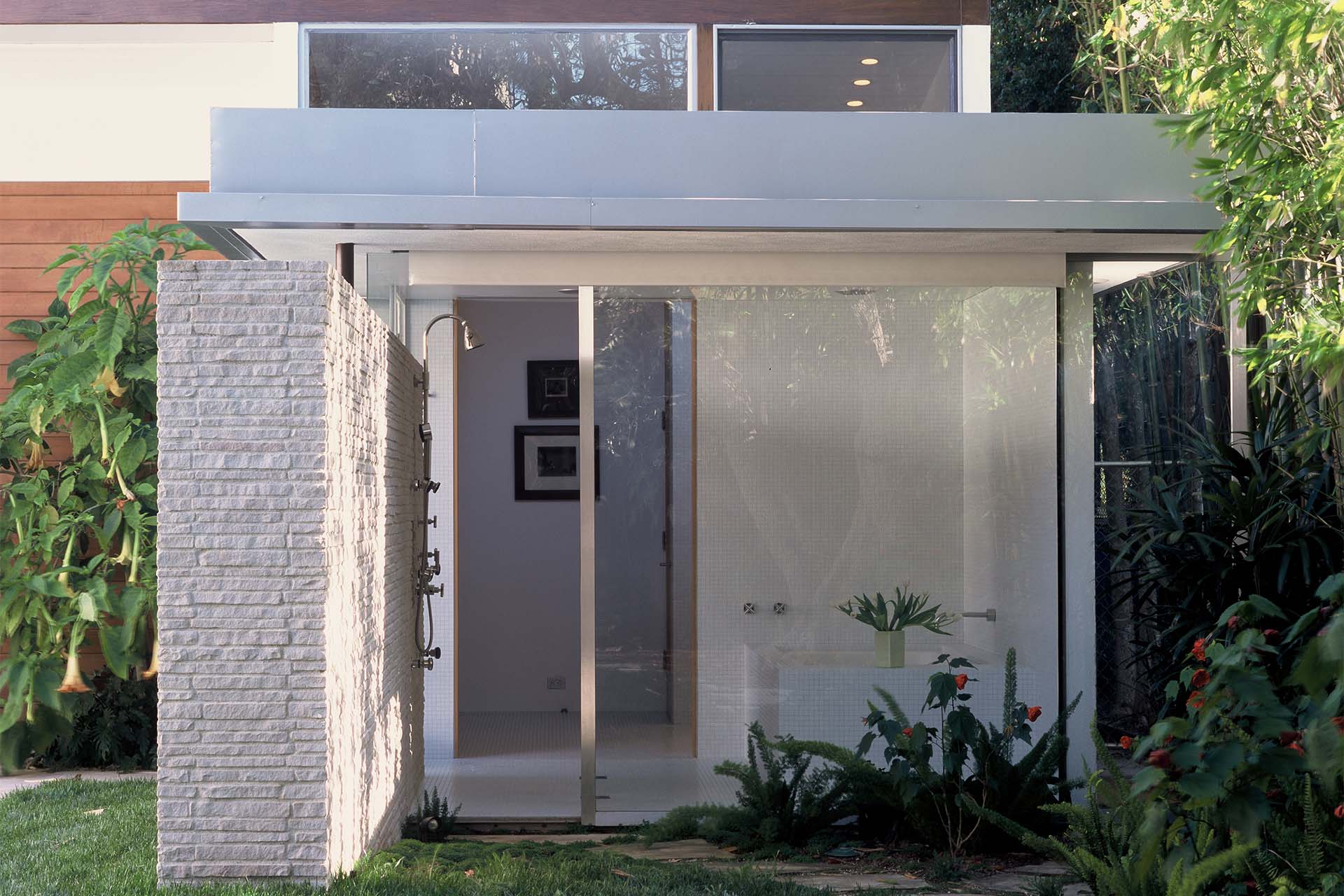 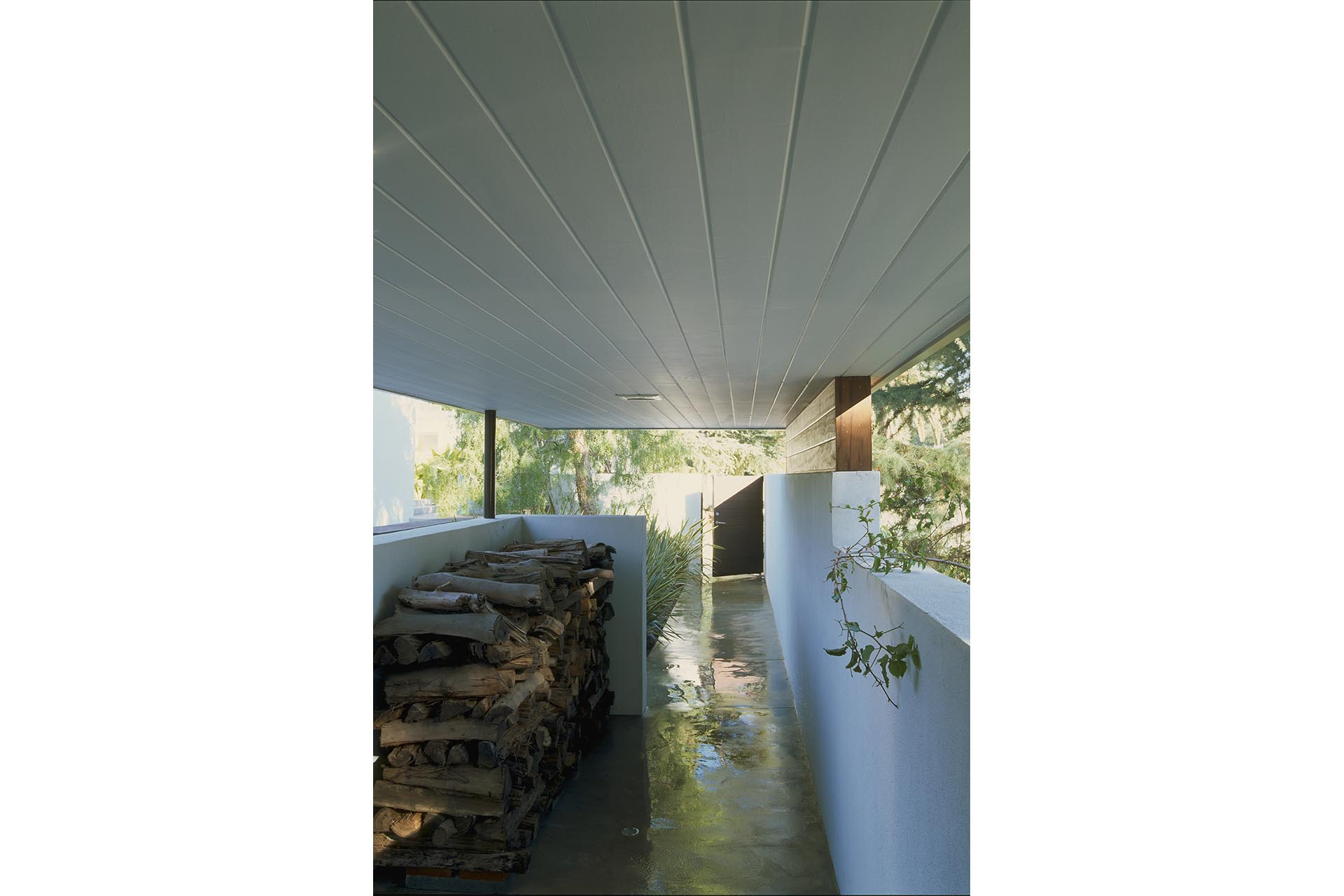 This residence at 315 Via de la Paz was designed and built by Richard Neutra for Benedict and Nancy Freedman in 1949. The small house for two screenwriters sits on a large lot and is set back from the street to offer privacy as well as unobstructed ocean views. Between 1959 and 1988 several additions were designed and built by different architects.

In the Mid-Nineties, the first phase of the work presented here was started. It includes the completion of the hardscape around the house, the addition of a garden shed and privacy walls, gates and entrance stairs, garden walls and landscaping. A reflecting pond by the entrance was added, and the siding was restored to the original stained redwood finish.

From 1999 to 2002, after an ownership change, the second phase, the addition of a second floor with two bedrooms and baths, an enlarged master bath area and the remodel of the kitchen were undertaken, An aluminum trellis was added to a patio outside the kitchen, which had been completed in phase one. The additions blend with the original structure, and the basic idea of the open flow between the inside and the outside is maintained and reinforced in all areas.

The historical significance and high spatial quality of the existing building were determining factors for the architectural approach for both phases, and were understood by both clients. Previous alterations had been made, and had changed the character of the house slightly. Although they were mostly well integrated into the original, the structure could no longer be considered a pure and pristine Neutra house.

The first phase attempted to complete a scheme that was missing the exterior elements, and to surround the house with structures that screened it from the street, were sympathetic to the structure, and fulfilled the contemporary demands of the house.

The second phase, with a significant addition of floor space, had the potential to change the character of the house greatly. A conscious decision was made to design the new elements as integral parts of the original structure. Parts of the house were restored back to the original state, while new portions attempt to interpret the intent of the original design and to extrapolate the inherent spatial and structural ideas.

The second floor achieves a dynamic on its own, with large window bands and roof overhangs with detailing emulated from the original. But despite the significant change in the massing, the final composition results in an integrated and seamless sense of continuity between the different generations of the building.

The master bathroom extension encroaches into the rear pool courtyard, and intensifies the more urban character of the space by focusing it with a horizontal stone wall. The resulting greater intensity plays off the yard sloping towards the ocean, visible through the transparent and openable living room to the south.

The goal of the design, an unobtrusive extension of the basic ideas of the house, freely interpreting the spatial possibilities of the given situation, has been achieved in a seemingly effortless manner.